Many people are aware that the competition to get into engineering programs has been rising in recent years.  This is often seen in the rising admission averages required to get an offer, due to this increased level of competition.  Although many people acknowledge this, they may be surprised at some of the numbers so I’ve compiled some graphs to help visualize it.  First, let’s look at application numbers to engineering programs.

The data here is for 1st choice applicants to several of the most popular Ontario engineering schools, which can be obtained from CUDO.  Unfortunately the 2013 and 2014 data is not available yet, although I’ve estimated what I can for Waterloo.  I use the 1st choice numbers, because these represent individual applicants, who presumably really want to go to that school.  So, first let’s look at the applications from Ontario Secondary School students over the past 5 years.

Over 5 years, we see the 1st choice applications to Waterloo rising from about 1,700 to 2,700.  Over the same period, our capacity in Engineering only increased by perhaps a few dozen, therefore much more pressure/competition for those spaces.  We see some rise at the other schools too.  Interestingly, Waterloo has been the most popular choice among Ontario residents for Engineering since before 2010.

Now let’s look at the trends for applications from outside Ontario: 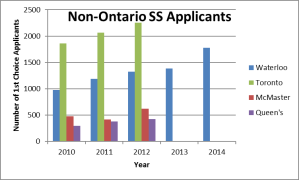 Again we see at Waterloo a rise from about 1,000 1st choice applicants, to 1.750 in 2014.  Also of interest is that Toronto is the most popular destination for applicants from outside Ontario.

If we put the two together, we can see the total rise in 1st choice applicants: 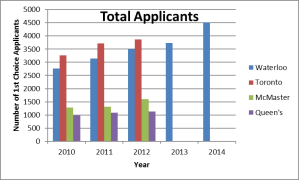 To illustrate the effects of this increase in competition, we compiled data on the number of applicants (1st choice + all the others too), who had a 90% admission average or greater, and who did not get any offer to Engineering, and the results are somewhat shocking.

So back in 2010, about 100 applicants with a 90%+ average didn’t get an offer.  Most of those were likely due to English language proficiency problems.  But in 2014 the increased competition has resulted in over 1,300 in the same situation.  The English language proficiency issues have not increased significantly, so most of these are just not getting offers because there are too many other applicants with a bit better stats.

We can see now why so many applicants with very good grades were shocked to be refused admission to Waterloo in the past year or two.  A few years ago, a 90%+ average almost guaranteed an offer to Waterloo, but no longer.  So this is the situation we’re dealing with, and some future posts will describe some ideas, along with updated insight into the 2015 admission cycle.